As expected, I’ve neglected updating this blog and spent more time in the basement. Since last update, there really hasn’t been that much progress on the layout per say, however I did finish wiring up the turnout control for the Prince George staging yard. And of course, I have yet to take photos of the panel for said staging yard, maybe I’ll save that for a future update.

I did finish the fascia around the layout, and decided to give it a couple of coats of green paint to seal the hardboard and to give it a (somewhat) finished look. Here’s a shot of the one end of the layout looking towards Kennedy 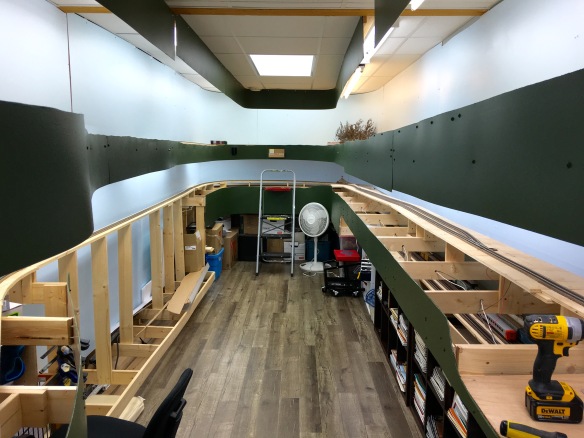 The weekend of September 17th 2016 was the annual Greater Edmonton Train Show (GETS) which while small in size, brings several modellers in from out of town. With the suggestion of a friend, I invited several modellers from the province to operate the layout on the Saturday afternoon. We had 6 operators paired into twos running trains on the layout, along with the first use of radios and an RTC. Everything went very well, and the ops seemed to get used to the OCS clearances I had made up. Other then a few minor problems, the layout ran very well.

A week later, the NMRA OPSIG group held their Northern Rails meet in the Edmonton area, with my layout making it’s debut. Again, we had 6 operators (plus one RTC) putting the layout through it’s paces, running 10 trains in 3.5 hours. I was happy every train I had staged ran, something that so far has not happened with our regular crew. It was very safisying to see the op scheme I designed being used, and more importantly, running with no major issues!

I’m currently researching the BC Rail MBS system that was used up until the late 1980’s, I think I will adapt it for future op sessions once I figure out what forms were used in 1989.

Once fall has ended in my area, I plan on spending more time in the basement, with the start of scenery to commence at Kennedy. The diesel fleet conversion from Soundtraxx to LOK Sound continues, with a good portion of the fleet complete. I’ve acquired several of the new Bowser SD40-2’s which will be covered further in a future post.