In 2004 CN took over the operation of BC Rail. I had planned a railfanning trip to shoot what remained of the equipment and operations that summer before CN could “mess everything up”. 2 days before I was to leave for Pemberton BC (to shoot the helper operation) a friend suggested I go north and that he tag along. What was to be a week long trip turned into a 3 day trip (due to the friend’s work schedule) and I had done no research on the lines north of Prince George. Although the weather was wet, when we rolled into the Dawson Creek yard the first thing I thought was “This is begging to be modeled”. A few more trips the following year and  I was hooked, I wanted to model BC Rail’s Dawson Creek Sub!

Although not on the Dawson Creek line, here’s a shot I took on that fateful trip of a southbound freight near Taylor BC. Can’t beat 2 SD40-2’s and an RS-18CAT!

A shot of the Dawson Creek yard and the way freight:

So when I returned home did I start building the Dawson Creek Sub in HO scale? Well, no. At the time I was into On30 narrow gauge, and was busy modeling the Rio Grande in 1948. Time passed and I was not happy with the narrow gauge idea, and I found myself flipping through the pages of JF Garden’s British Columbia Railway more and more.

Finally, I decided to scrap the On30, and model the BC Rail line from Chetwynd to Dawson Creek on the benchwork of the old layout. Another inspiration for the switch was the excellent research and modelling done by Tim Horton:

I ended up using Tim’s track plan for Dawson Creek (thanks Tim!) modifying it slightly for the space I had. The layout was roughly 17 feet by 20 feet (I think) and ran around the walls of our finished basement. I finished the track work and started running operating sessions with a group of local modellers in or around 2011. 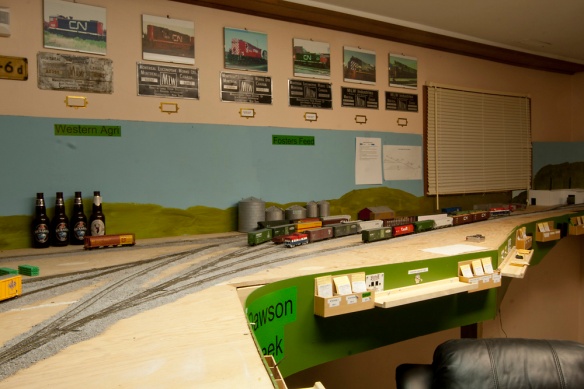 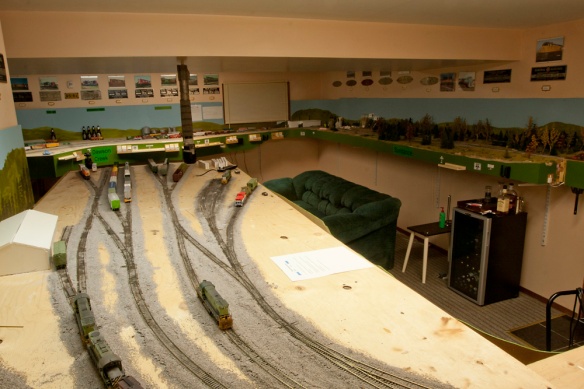 And the only sceniced portion of the layout, the siding at Sundance